Born in Algeria, in the region of Great Kabylia, Samy Berkani grew up between plains, mountains and urban settings in the cities of Tizi ouzou and Algiers. He saw the countryside empty of its population, which came crowding in the cities. Sirocco, hot weather and summers by the sea are his first memories.

A film camera in a drawer, without film, without batteries, without life. The sound of the shutter release intrigues.

But childhood and innocence quickly give way to doubt and misunderstanding. Algeria lives the darkest hours of its history and a civil war hit the country for ten long years. Algerians hold their breath while waiting for better days. He will not leave his Kabylia during this period, except for a trip to the south of the country. He discovered the Sahara, its fennec foxes and gazelles, its oil and its Algerians with different skin colors.

In the desert, a bloody man standing in front of his Lada car completely flattened. He has just been a victim of crossing a herd of camels.

In 2005, his baccalaureate in hand, Samy Berkani flies to France. He discovers that the french culure is different from “France of TV” (broadcast in Africa). He leaves the Djurdjura mountains for the Jura mountains. He lived a few years in the Paris before settling in Lyon to get closer to Jura, his adoption land. It was at this time that he held for the first time a reflex camera in his hands … he will not leave it.

Samy Berkani makes his weapons in the egion of Jura, taking a passion for the Icelandic horse, which will be his first photographic subject. He spends a few minutes, then hours and ends up staying there, in the middle of the herd, to observe their behavior and beauty. When the lights were low, he made the first images that make him dream. Jura, snow, white, minimalism, cold … Samy Berkani understands his interest in what is simple. His sub-Saharan physique is not made for the cold. A layer of fleece will replace the fat that is missing.

… At night, in the mountains, he take pictures of the starry sky away from the light pollution of cities, he hears strange sounds, unknown cries … He is afraid, because we are afraid of what we don’t know.

A fox crossed during a walk, a small herd of chamois grazing, a curious but cautious squirrel, the nature is revealed little by little to Samy Berkani. He would like to see these animals longer … so he hides and waits. A boar, a roe deer, a fox … it’s the beginning of the widlife photography adventure.
He was used to photographing humans in the street, but interfering with the unobtrusive life of animals presents a different challenge. So he invests, he equips himself and spends a lot of time. He discovers another world and lives privileged moments. He also understood how human destroys nature and sees photography as a tool for activism.

… They had been standing face to face for a good ten minutes. He sits gently. He pulls out a clump of frozen grass and pretends to graze. The young chamois ends up lying on the ground without taking a look at Samy.

The Jura is the gateway to the Far North. Samy Berkani flies to Sweden, then Iceland, then Norway … The Nordic adventure was a continuation. On Senja Island or the cliffs of Husavik he experiences great serenity. He feels creative. The cold weather stimulates his mind. He dreams of far away, always farther, colder, Spitsbergen, Greenland … one day …

For his first photo project, Samy Berkani chose his first love, the Icelandic horse. He goes out to meet him in his natural environment, Iceland, at the borders of the Arctic. 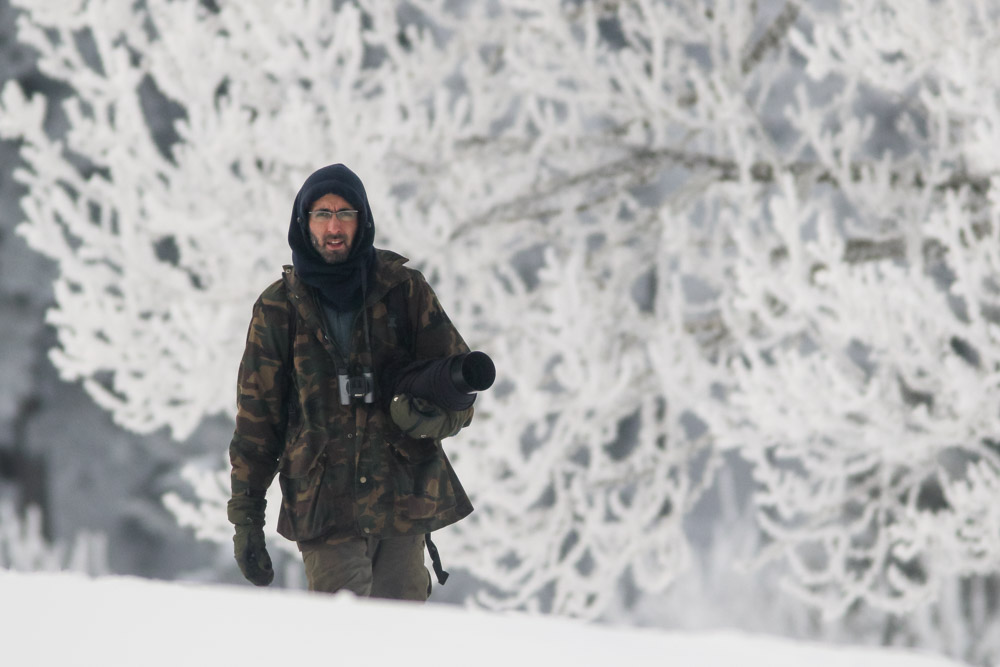